On January 31st to February 1st, OWS Special Projects Affinity Group (OWS SPAG), New York Community's For Change (NYCC) and other groups and people from around the country headed down to White Sulphur Springs, West Virginia. Were President Donald Trump and the Republican GOP were meeting at The Greenbrier retreat to plan and map out there 2018 agenda and plan for the up coming midterm elections.

Thanks to Groups on the ground in West Virginia and Center for Popular Democracy (CPD), we were able to make this happen, we wanted to make are voices heard not just by those inside the walls of the Greenbrier Retreat but by the media, the core message which we wanted to send was plan and clear "HANDS OFF" our Dreamers, our Healthcare, our Children, our Education, our Social Security, that we will not be silent and stand by while they strip away our freedoms and liberties one by one turning there backs upon the constitution they have sworn to uphold and protest, putting party and corporate interest before people and that come November 2018 We will make our voices heard in the polling booths across America!

Demonstrators came from all across the county to attend, they began the day at a near by staging area set up at a local park then proceeded to march to the gates were a speak-out took place with people telling there stories at the gates, which were blocked and guarded by State Police. A number of hose attending Trumps GOP meeting could be seen arriving on The Greenbrier green shuttle buses, during the speak-out.

This action is one of many taking place every day around the nation too reclaim our democracy, our freedom and liberties which are under attack from the Trump administration and the GOP.

JOIN THE FIGHT FOR LIBERTY AND JUSTICE NOW!!!! 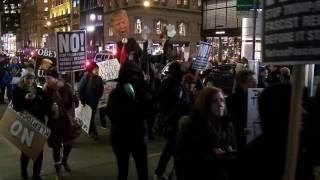